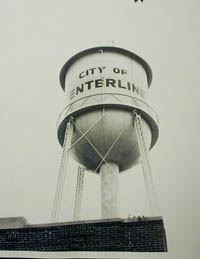 2011 marked the City’s 75th Anniversary. Center Line has come a long way since it first became a “city” in 1936, and we would like to share with you some of Center Line’s history.

Michigan became a state on January 26, 1837. That same year, what was later to become Warren Township also came into existence.

It was more than 100 years after the pickets were erected around the Fort at Detroit before the first settlers penetrated into Warren Township. There were two reasons for this delay; first, lack of roads, and second, the policy of the French to protect the fur trade by keeping the wilderness intact. The latter was accomplished by circulating rumors that the region beyond the riverfront was an impassable swamp. During the 1700s and early 1800s the only vehicle of transportation was the canoe and the only highways were the rivers and lakes. Therefore, the land along the river and lake shore was the first to be cleared and settled. Up until the 1820s Warren Township travelers detoured around it, going miles out of their way to avoid its snake infested depths. Gradually, as land became scarce, the French, German, Belgium and Irish emigrants poured into the township. With great courage and determination, they set to work with spade and axe and felled the trees and drained the swamp.

First named Hickory in 1837, changed to Aba in 1838, it became Warren Township in 1939. There are several theories regarding the name “Center Line.” Some are based on fact, others on fancy, but all tend to prove that Center Line was aptly named. There were three Indian trails leading from the fort at Detroit to other trading posts in the northern wilderness. The first was the river trail which followed the river and ended at Port Huron; the second was the Saginaw trail and ended at Mackinaw at the Straits of Mackinaw. Through the center of the two trails, the Indians had beaten a trail which followed the “center line” by the French. Eventually, this primitive trail became the main road traveled by the early settlers on their way between Utica and Detroit. It is now Sherwood Avenue. It was known as Center Line road also. A part of the road in Detroit, between Van Dyke at Grinnel and winding down to Harper, known as Cyril and Methodius, bore that name until sometime around 1945.

Farms lined the road, and eventually a store and saloon made their appearance at the corner of Sherwood and Ten Mile Roads. The crossroads with such a “shopping and recreation center,” naturally became the meeting place of the local population. Center Line had just that sort of beginning. Kunrod’s Corner, as it was commonly known, became the news center for the area, and it was natural that community problems should receive their consideration over a frothy brew served by Mr. Kunrod.

The Catholic families found the long trek to church on Sunday a mighty test of faith. Nevertheless, many of them regularly traveled all the way to St. Mary’s in Downtown Detroit. That was a major problem for those pioneers, especially in bad weather.

An occasional visit by a missionary priest was, indeed, welcome. Mass was often performed in the living room of one of the early settlers. Religion, always a strong factor in bringing and holding people together, was the thread that more closely bound them into a community. The crossroads had now become a community. 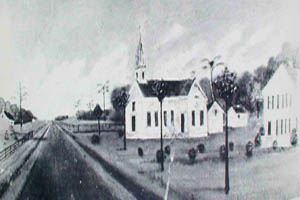 The fervor for a church of their own increased and the community leaders of around 1853 now found that the problem of location was not too easily settled. However, after much arguing and many property donations, a six acre site was acquired on Van Dyke, and those that wanted the church located on there won out. The church was built in 1854. The new church, a half-mile east of Sherwood, on Van Dyke attracted ore farmers to the area. The closest other Catholic Church was Assumption Grotto on Gratiot at Six Mile Road, still a long way from Center Line.

Growth was not a rapid thing, as we know it today, but no one was pushing or cared too much. However, it was only four years until the church was changed from a missionary status to one with a resident pastor.

Time moved along. The Civil War, the Spanish American War, World War 1, all found their way into the pages of history. It’s people, young and old alike, made their contributions…many with their lives. Center Line shared the sorrows of those wars. 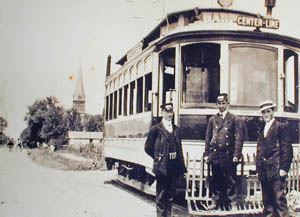 In the early twenties, Center Line was a rather isolated community of less than 2,000 people whose homes and business places were built around St. Clement Church. The transition from horse and buggy to automotive transportation was just beginning to take place. The community was reached from Detroit by Van Dyke and by street car. The car tracks were built high on the side of Van Dyke, and then paved with crushed stone from Eight Mile Road north. The street car tracks ended at Ten Mile Road. Recently during road work at 10 Mile and Van Dyke, the old street car tracks were uncovered.

Center Line at that time was separated from the outskirts of Detroit at Six Mile Road by four miles of green meadows, broken here and there by a sturdy farm house. As far as the little community at the end of the tracks was concerned, those four miles may as well have been 40 or 400, so different was their way of life. They even had a slight accent picked up from their German parents. 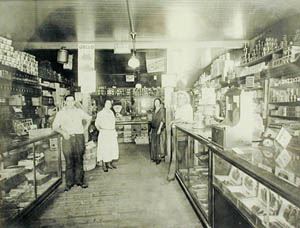 In stepping off the street car, one would encounter no buildings for about a block. The first place was Gus Millers with a barber shop next door. Then came Buechel's old General Store and a little further on, St. Clement Church. Across Engleman, then called Church Street, was an old frame store that was Rinke's hardware store. Further down Wilke’s Butcher Shop and Drug Store was Center Line’s entire business district.

There were no good roads in the community. Van Dyke, paved with crushed stone, was both rough and dusty. Ten Mile Road was a narrow one track dirt road which was practically impassable in the spring. Nevertheless, people from the city, as well as retiring farmers were attracted to the community by the convenience of church and stores with transportation to Detroit. They made their homes here and Center Line grew.

In 1924, some of Center Line's leading citizens, Fred Endress among them, thought that self-government, at the village level, would provide better community living for them. The idea seemed attractive. It wasn't long before the people of Center Line decided they wanted to incorporate. A committee was formed for the purpose of devising a village charter. On April 28, 1925, Ed J. Carney, Alex Schoenherr, Fred T. Wilson and Ed G. McKay were elected as Charter Commissioners. After spending much time at their work, they devised a charter and presented it to the governor for his signature. On July 11, 1925, Governor Alex J. Groesbeck signed the charter which was accepted by the voters on November 9, 1925. 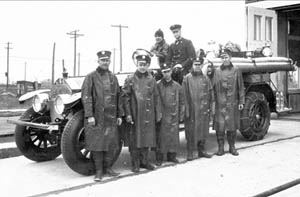 In March of 1926, they purchased a LaFrance fire engine. The fire fighter saw much service, and at one time was the only fire engine in the township. It’s high axles and large wheels made it possible to “navigate” the roads of the township and Center Line. Incredibly, this same fire engine was recently purchased with donations from the Center Line community in 2007. It is currently being restored by members of the Friends of the Fire Truck.

The second election, November 8, 1926, retired Wolf, Henk and Wiegand and brought Ray Stilwell in as a commissioner. The Village of Center Line now needed a municipal building and in September of 1927, voters approved a $30,000 bond issue.

The first few years as a village included the last years of the “roaring twenties” as they were called. The prosperity of those years ended abruptly in 1929, and the dreadful depression set in. The little village struggled along. Officials bought only the

barest of necessities and as William Steinhaus once recalled, “We managed to get by somehow…no one would give us or anyone else credit in those days…we had trouble finding enough money to buy a broom, but we made it.” Steinhaus was the first Clerk-Treasurer for the City of Center Line, holding that position for twenty-one years.

From Village to City

It was, we presume, the memories of those stark days that set a pattern of very cautious spending in the years that followed. When the transition from village to city took place in 1936, Center Line had gained valuable experience in management. That good management has continued to prevail and has been reflected every time the city has had need to borrow money.

Historical Society of Center Line meets on the 1st Friday of each month at 7:00 p.m., Center Line City Hall, 7070 E. Ten Mile Road. The public is welcome to attend. Visit our web site at http://centerlinehistory.org/

More information regarding the history of Center Line can be found at the following locations: